A 'ping' is a basic network test that will send messages across a network to a computer and measure the time elapsed from sending to receiving the messages. It will record any packet loss and average trip times. The ping test is testing the UDP protocol of the TCP/IP stack. UDP compared to TCP does not re-transmit as when a package is lost or dropped, this can tell us something. A very small percentage of packet loss may not be something to worry about. Large amounts of packet loss could be a symptom of a hardware or network configuration issue.

How to execute a Ping Test

The -t tells ping to perform a continuous test to the server and the -l 2000 sets the packet size to 2000. Testing with a larger packet size puts more load on the test than the default 32 bytes. We have seen the 32 standard test pass and not show when there has been a transient network issue.

In a successful test: 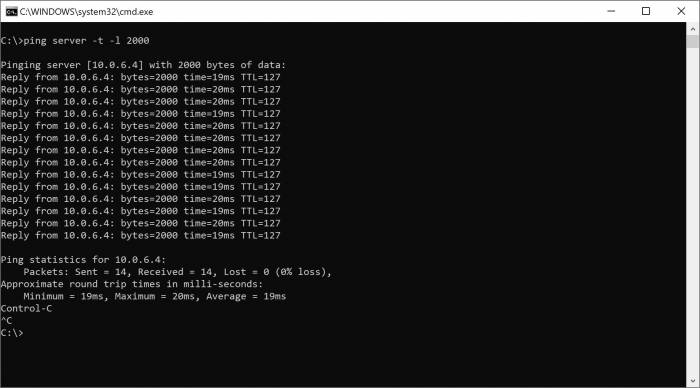 Increasing the buffer size of the ping test in the -l parameter will increase the load of the test. Using a continuous ping test with a larger packet size could help identify a network issue. Such as ping -t -l 20000

Possible causes of Request timed out

If you are seeing Request timed out messages this indicates packet loss. A small percentage of packet loss is typically not something to worry about. Ensure you are testing with a large enough packet size as a standard ping test may not show a network issue as 32 bytes is a tiny packet as seen below.